From 2006 through 2009, I was a regular pop culture columnist for the now defunct Cleveland Free Times and later, the Cleveland Scene. The following essay ran on May 17, 2006.

This was one of the first piece of creative nonfiction I ever sold to the paper, and one of a few precursors to the "Rainy Day Woman" column. Eight years seems like it's yesterday--and like it's a lifetime ago. My, how things have changed.

Smoke hangs low and thick in the cavernous concourse. Guys chewing stogies lean into the bar as they scratch away at the daily racing program. They sip scotch. They sip beer. One shoots a clandestine look over one shoulder, then the other before turning to the guy next to him and begging the question of the moment: "Who do you like in the fourth?"

"The 10 horse is the horse that's in form," says his compatriot in a voice rough as gravel. "I like the 10 horse in the fourth."

There are 50 men to every woman, maybe more.

When the fourth gets underway, all eating, drinking and talking stops (smoking continues). Eyes move to one of the myriad televisions or the outdoor track.

"Bring it on to the house, nine!" croaks another. He takes a furious drag of his cigarette and stamps out the butt. "Kissy, kissy, kissy, nine. Your daddy's waiting at the house!"

The gravitational pull of the race is inversely proportional to the distance of the pack from the finish line. Men suck in close to the screens or step up to the railing that surrounds the track. Their fists clutch programs, now rolled into tubes, would-be weapons. They beat their palms, the bar, the betting desks. They implore and curse and berate until finally, the horses thunder across the finish line.

There are two eventualities: One is characterized by a victorious hand thrust into the air ("Chatcat is my angel!"), the other by a disgusted throw of the program to the floor ("Goddamn that five horse.")

Their yells disintegrate into murmurs. They pick up the offending programs, check official results and turn to the business of who they like in the fifth.

I have crossed a plenum and entered the world of Thistledown. It thrums seven days a week with races live and simulcast, one ejaculation after another.

"Eight to one?" answers his compadre. "Son of a bitch."

I am a jellybean floating in a mug of draft beer.

"Why can't I just bet on the one with the name I like?" I ask. "Or one wearing my favorite color?" My husband and his associate exchange a wordless look.

"Not the nine horse, that's a maiden," says my husband, ignoring me and tapping the cryptic program.

I lose two dollars. I win four on a horse that comes in third. ("Don't say third," I'm instructed. "It's called placing.") I lose six. I bet three. I lose. I try to place a bet too late. I miss this race, that one.

The last race of the day looms. My husband and his associate commiserate over some mysterious phenomenon called the trifecta. I pick the horse whose silks are described as "purple and pink halves."

"My favorite colors," I say.

An old-timer approaches my husband and his associate and gives them each a meaningful look. He circles the six horse on a program.

"You watch the six horse," he says. "Hear me? The six horse." He shuffles back to his seat. My husband and his associate nod slowly and hunker over the program. 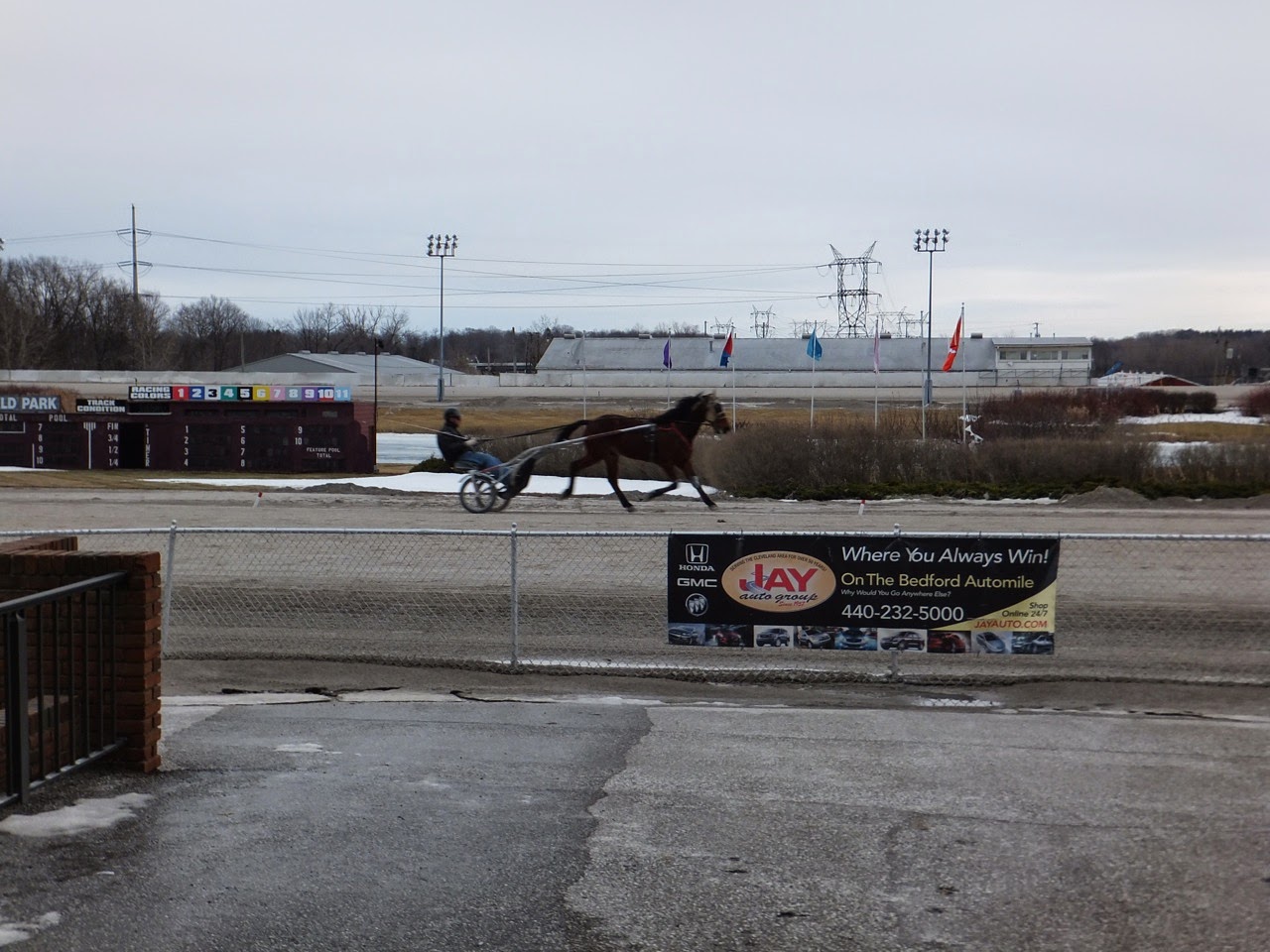 The call-to-post bugle rouses a man lying on a bench. He bounds up and begins to dance. He is dressed in a black suit, black tie and black hat.

I watch the horse festooned in purple and pink, number five. He goes from third to second.

I am on my feet. "Come on, five!" I am running to the rail. "Five! Five! Five!" I am slamming my program into my palm. The jellybean is transforming into an old guy with a pocket full of Viagra.

"Five!" I scream. He hears me. He lurches in front at the final moment.

Victorious, I turn to see my husband and his associate still seated at the picnic table. "I won!" I say. They do not respond. They are watching the track with befuddlement.

One horse is rearing and whinnying at the fourth furlong of the five-and-a-half furlong race. The jockey has dismounted. Staff and an outrider approach.

My husband is studying his shoe. His associate chews a fingernail.

"Oh lookie," I say, "it's the number six horse. That one of your trifecta beauties?"

They don't say anything. The rogue horse snaps his head and stamps his feet.

The trainer finally coaxes the protesting horse down the track. He passes the finish line reluctantly. "There he goes," I say. "There goes the jockey. Too bad he's in the sag wagon."

"Did you have to say it out loud?"

We slosh down the remainder of our warm drafts, step through the empty concourse. Porters sweep piles of bet slips up like dried leaves. We pass a fellow as he trudges up the stairs, cigar dangling from his hand.

A good buddy I worked with lo those many years ago used to go down to West Virginia to bet the pups. On one occasion when he came in the next day I asked how he did. Herbie says "I was down three hundred but I got half of it back on the last race. Good thing too-I really needed the money."

He was joking, of course, but it was one of the most succinct ways I've ever heard of describing a railbird's mentality.

BTW thanks for the tips on 'Man on Wire' and 'Sugarman.' Found 'em both at the library today.

Had a friend who was a "Professional Wager". I saw it on his tax return. He had piles of VHS tapes, some he made, some he bought, of horses being trained early in their careers. He set up spreadsheets for tracking and analyzing the progress, for instance how they ran in mud. His day job was Fortune 500 market forecasting consultancy. He was extremely frugal. He told me that concerning the money he took to the tracks, which was significant, if he couldn't hold it out the window on the freeway and not think twice about dropping it, he couldn't bet it right. Never forgot that.