My Gram Soos was born in 1916. Whenever the topic of the Great Depression came up, she'd always fit the following into the conversation.

The War was of course backed by untold dollars courtesy of Uncle Sam. WWII was the biggest stimulus package of all time, but no one called it that. 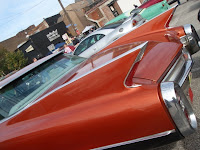 Did it work? Hell yes it worked. After all, Hitler was real. Pearl Harbor was real. Americans could see the looming threat and they wanted to be a part of vanquishing it. They were proud to serve and see their sons serve. Americans bucked up behind gas rations and bellied up to city chicken while Rosie the Riveter did her part on the home front. These were the right and patriotic things to do.

The money Uncle Sam spent on WWII was the most effective stimulus of all time because Americans believed in every nickel of it. They perceived it as money that needed to be spent.

This essay could now take a long detour through the wars in Iraq and Afghanistan, but I'll leave that circuitous trip for you to meander on your own, dear reader. Instead I'm going to jump to 2009, when, in order to address the financial crash of 2008, Uncle Sam pumped some $800 billion into everything from unemployment to infrastructure, housing to education. Obama's stimulus package was officially titled the American Recovery and Reinvestment Act of 2009.

Unfortunately, John Q. Public didn't believe much in it. You can argue that's because the dollars weren't visible enough or that the GOP bad-mouthed it into dis-credibility or perhaps you have a reason of your own. No matter. In the end, the results were lukewarm at best.

But the auto bailout? Now that was a stimulus with some muscle. 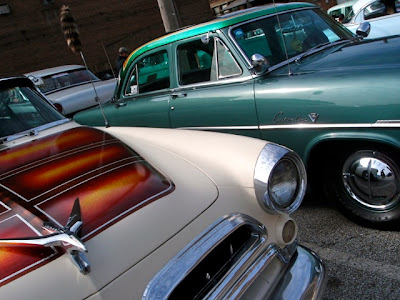 Bush threw the first lifeline to Detroit in 2008 by redirecting some TARP (aka bank bailout) funds. Obama threw more dollars Michigan's way in 2009. In the end, Washington pumped about $80 billion into the withered auto industry. Did it work?

We love our cars. We touch them every day. Our cars are real. I have never owned an American car, but I still love the American car industry. Throw American dollars at something Americans believe in and it will succeed in the game of perception.

Who backed us when we were down?

So despite the initial unpopularity, despite all the bellyaching and moaning from the right, the middle, the wherever, Obama's staggering and consistent lead in Ohio and Michigan should come as no surprise.

Now then, consider this match-up:

We all know the blue collar guy will KO the white collar guy with the first punch. Therein lies the Right's terrible troubles, which are coming to fruition in the wake of its We're-Against-Everything-Obama's-For-No-Matter-What modus operandi. The anti-Detroit campaign might have been appealing from a Forbes point of view--the what-ifs have been endlessly dissected and inspected, but you can't always run the country like a business. Sometimes you've got to listen to America's heart, where you'll find Chevy in a line-up with Mom, baseball and apple pie.

There are some things you should never bet against. 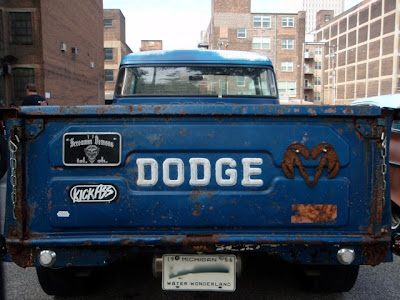 P.S. My mother inspected tin plate in the steel mill in Birmingham while the men were away. Just lost a 91 year old friend last week. She said WW II wasn't all bad. Lots of good looking young men in uniform whenever she rode the trains.
R.I.P. Rosie Riveter

I've only owned several cars. I tend to keep them for a decade or so because I don't obsess about having a shiny new ride. A Mercury, a Toyota, a Ford and a Saturn. We are now a Mini Cooper couple. The Mini is fun, but my favorite of the bunch was this awful electric blue Ford Explorer Sport (2-door) that I kicked the crap out of from 1992-2003 or so. Man, I dug that car. You could see it a mile away in the parking lot because it was SO blue. That thing got me to the best concerts of my life, about 250 Yankees games, vacation houses on the Carolina coast and...oh yeah...back and forth to work every day. After 250k+ in mileage, it just didn't want to work anymore. Watching it get towed away that last time was a sad day. I swore I wouldn't get attached to a car again. Now we just lease...a new Mini every 3 years. Much easier, but I miss my ugly electric blue Ford.

You nailed it, Earl. Your comment exemplifies how emotionally evocative the auto industry is.

People always say, what industry are we going to bail out next? Why bail out Detroit? The American auto industry is like no other, so singular and iconic. Even people who hated the bailout still wanted to see Detroit rise from the ashes.

I didn't think Romney could outdo the "Let Detroit go bankrupt" debacle until he came up with his 47-percent-of-Americans-are-dependent-losers speech.

War was always the greatest stimulus...until Korea and Vietnam, when all the stimulus profits went to Ike's Military Industrial Complex instead of local communities...like the original Cleveland Tank Plant, now the IX Center:
http://ech.cwru.edu/ech-cgi/article.pl?id=IC1

Gram Soos was right. Not so much, your argument about the bailouts. American taxpayers will never get their 50+ billion back. The bond holders will never recoup the money stolen from them. American muscle, in this case, is the power of the Government to screw whichever group of people they want or favor any group. GM is using government money to pay back government money so that they can borrow more government money. Cars or solar panels. No difference.

When I hear the great big cooling fan behind me spool up while accelerating my air-cooled flat four engine, everything makes sense and I am ecstatic. Every time, every gear, every day.

My ancient Ford 4WD truck has reached the status of Pack Mule, strong and reliable beyond expectations, occasionally braying when I overload its paper thin clutch linings and creaking springs.

When I drive my generic aeroblob Korean clone-car, I am bored and restless, and I have trouble finding it in parking lots.

Actually, in my research, the fundamental boom in our economy post-WWII was a function of the G.I. Bill and the growth of capital markets. War is destructive, always, in the final analysis.

Someone also brought up the GI Bill over at my Facebook page, where I linked this post.

"American taxpayers will never get their 50+ billion back."-Bill

sell it to the Chrysler bondholders

Hell, I spend that on chrome.

I never noticed before how much that 'Ram' decal looks like a diagram of the uterus and fallopian tubes. "Ram Tough", indeedy-doodie!

Something that seems often forgotten in the question of whether or not we ought to have supplied GM and Chrysler with bridge funding: Many, if not most, of the independent auto parts suppliers in the US also support the US operations of foreign manufacturers-Honda, Toyota, VW, Kia-all of them. The impact just not on domestic but world-wide industrial activity would have been catastrophic.

As to the bondholders? They most likely would have been screwed with their pants on either way. All things being otherwise equal, the country is better off with the jobs saved.

WV: 'sogrand'. That one's like getting dealt a natural inside flush.

Remember when all the Righties were trying to find something nice to say about Bush?

Thank God that man kept us safe for seven years.

MR: As we speak, Todd Akin is giving a speech on how the Dodge Ram becomes spontaneously pregnant whenever you shift into overdrive.

I was not completely against the auto bailouts, how they went about it is an issue. I think the model used in the 1980s Chrysler bailout was a betterway to go about it. Rewarding the UAW at the expense of bond holders is just wrong. The State of Indiana took a bath in the Chrysdler bailout (so did the State Teacher's Union Pension Fund).

One could make an argument that the decade of Kenseyan spending and stimulus put in place by the FDR administration did not bring us out of the Great Depression. As your Granny said, it took WWII.

Only a complete mobilization of the economy to the war effort saved us.

One can look to what brought us out of previous deep recessions. Korea, Vietnam and the decade long WOT has not spurred the economy. The Kennedy, Reagan, and Bush tax cuts did.

Something to think about.

Something to think about. The whole damn world was blown up after WWII. The only store open was in North America. Times have changed. This is not sophisticated economics sports fans.

Had the same amount of money been spent on the the New Deal as on WWII, the US would have been brought completely (instead of partially) out of the Great Depression. It was the size of the stimulus, not what the stimulus was spent on, that made the difference in the 1940s.

Incidentally, there were TWO depressions during the 1930s. The second came about after FDR cut back on New Deal spending.

Good points Kirk. After I posted I recalled something else too about this little stroll down memory lane. The stimulus that fueled the economy out of the slump of the 70's( The dreaded Jimmy Carter Years the GOP likes to wave around) was EZ CONSUMER CREDIT. One of my favorite quotes about the Reagan Economic Policies -"They Strip Mined the Economy." Hells Bells once an amoral individual figured out they could become CORPORATE RAIDERS and make a killing in the markets by pushing every edge available and at most risk 3-4 years in Federal Prison it just became a matter of playing the odds. But, in classic American fashion the players (Investment Bankers)killed the goose that laid the golden egg(See: Credit Default Swaps) and now we're having to reboot the casino. And the fault gets laid on the GUBMINTS doorstep. True, just 30 some odd years late.
Funny thing is they label BHO as a Socialist but forget that "Two months into his presidency, Obama summoned the titans of finance to the White House, where he told them, "My administration is the only thing between you and the pitchforks."(Google it)
WHY ISN'T WALL STREET IN JAIL? Anyone that doesn't believe Capitalism plus Representative Gov't post Citizens United is ORGANIZED CRIME is in a deep state of denial. (Not a river in Egypt)

FACT: Clean Coal is A MYTH

FACT: Managed Medicare Sucks. Talk to Any Administrator of ANY Home Healthcare Agency.

RJ should've coached the Pres. Couldn't have been any more boring.

Say, RJ, you'll get a lot more votes on this blog for Ms Stein if she were to change her first and middle names to "Frosty Beer".

You missed your calling-Political Consultant. LOL.

Afterthought- If Willard hears about this he'll use it at the next debate. True story-My 14 yo daughter watched the debate Weds and I had not heard her analysis until today. "Daddy that Gov. Romney smiled and said he'd give everybody everything." From the mouths of babes...