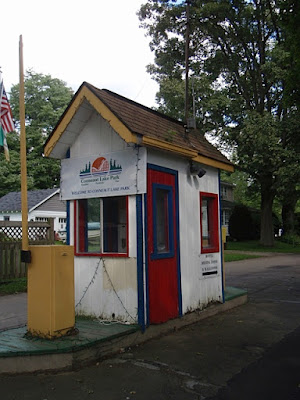 It was eight or nine years ago, maybe more. We were at Conneaut Lake Park, which was torn and frayed and holding on by a thread, but I loved the tiny old amusement park just the same. Eric and Jessie and I were bumbling around the Devil's Den and Tumble Bug and Blue Streak.

At some point, Eric and I sat down on a bench while Jessie ran off to a ride. A gram was seated next to us. We engaged in small talk.

Two little boys, soaking wet from the Cliffhanger Falls water slide scampered up to her. One was in trunks, the other wore an over-sized tee that hung almost to his knees. They were somewhere between nine and 12 years old.

"This is Tommy and Brenda," said Gram.

"I don't know why she's hiding her pretty swim suit. I just bought it for her."

The kid tugged at her sagging wet tee. "It doesn't look right, Gram," she said.

"Why are you always so funny, sweetheart?" Then Gram turned to us. "You should see her when I get her dressed up, which isn't very often. All the pretty dresses I buy her ... "

She fumbled through her purse and pulled out a handful of snapshots.

"She hates it when I show the pictures."

"Gram, can we have some more tickets?" said Tommy. 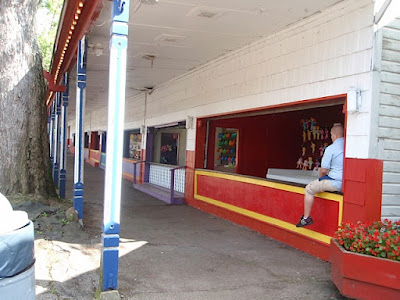 The kids ran off to the water slide. Gram showed us the pix. They broke my heart. This poor unhappy kid in pink and ruffles, looking down.

They struck me as rural people of modest means, so did most of the people that went to Conneaut in those years. It was in decline and very inexpensive.

We saw the trio several times during the day. Each time, the kid was looking down, tugging at her clothing and folding her arms over her chest (she was not overweight). The vibe she gave off was unmistakeable.

I'd never encountered such an obvious and innocent case of transgender. I swear, I could not find the girl in that little girl. She was a little boy, despite the first indication of breast development.

Unwarranted relief, of which I am not proud, washed over me each time I saw Brenda. Thank god Jessie does not have this problem, I thought. Thank god she is will not have to face persecution.

I'll be honest, folks. I do not care much for Caitlyn Jenner's money and celebrity, but I respect the fact that she has made life easier for little boys like Brenda. 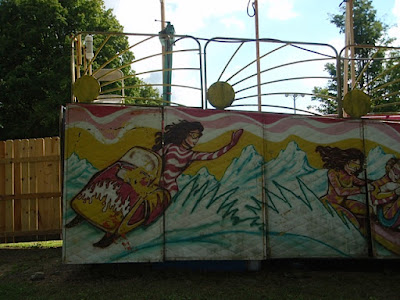 Thanks, Erin. This is a beautifully written tribute to Brenda.

My kids have taught me a lot about gender and sexuality. I try to remain open. In reading your memory, I wonder how many kids I pestered about clothing or dressing up as I parented my own kids. Not really sure, but probably what I thought were playful comments without much thought.

I remember many years ago in Kent, OH, a couple of parents whose son wanted to wear braids and they let him, braids with ribbons I think. He was about 5 or 6. I'd say that boy is probably around 25 by now. I know he got teased in school, but his parents and he were steadfast. It is still a great memory and example of wonderful parenting.

My girls were pretty girly and took to dressing up as princesses and fairies mostly. But girls have been allowed to wear boys clothing for dress-up; the reverse remains largely an exercise in caricature, though I know from our experience around here, many boys now do "get to" experience, freely, what it might be like to dress as a girl. I wish for this trend to continue, but it is a challenge for many of us in the adult world.

This is slightly off-topic of a person being transgender because I'm just focusing on clothing. I have to reiterate that my daughters have taught me a lot and I continue to need to be taught.

I have my judgements and prejudices, for sure. I see them glaring at me as the culture shifts into more inclusion, where I still am stuck in a cultural mindset of more rigid gender roles. I am so grateful for my kids.

I think it's all great--that I should be the older generation and that I can learn to change my outlook to one of greater knowledge and openness and understanding of who we are as humans.

I was just making the case in the office that all we are observing in homo sapiens is the normal statistical distribution of sexual variations found throughout nature. There is a fish species (Which I can't name right now, but I'm working on it)whose members change sexual attribution based on population fluctuations in breeding stock. Anyway...In reply I got 1. "You need to have your head examined" and 2. I am in opposition to the Almighty and risk severe consequences if I don't get in line.

Any regular reader of comments at this here blog knows I am quite suspicious of the grifter aspect of the high profile Caitlyn. Nevertheless I agree with our hostesses conclusion that the net effect will be increased tolerance for gender diversity.

The ability to change sex from male to female or vice versa (what is known as sequential hermaphroditism) is surprisingly common in the animal kingdom, especially amongst certain species of fish, jellyfish, and gastropods. Many reef fish such as wrasses, for instance, that are born female are able change sex to male (protogyny) during their lifetime. This is usually driven by the loss of the dominant male, allowing the largest (formerly) female to then take control of the harem.


allow the existence, occurrence, or practice of (something that one does not necessarily like or agree with) without interference.

It has not yet been determined if the harem is better off with her wrass in charge.