When I first returned to work after my brother John's suicide, a coworker said to me, "You know, he cannot be buried in a Catholic cemetery."

That was before John's name would become internationally associated with the award-winning film Leaving Las Vegas, although I'm pretty sure that individual would have said the same thing under any circumstances.

One man wrote to tell me he was going to "join" John amid pages of barely comprehensible ranting. One woman wrote me 14 years after John's death to tell me he'd made a pass at her while he was still married.

Once at a terrible book signing wherein I sat by myself at a table for hours with a pristine stack of copies of my novel before me, the one person who came in from the blinding blizzard did not buy my book, but asked me casually, "So, why did your brother kill himself?"

I do my best to mothball the unfortunate comments, but as you can see, they are pretty indelible. Hence, I did not comment on Robin Williams' death, but it did move me to this post.

The Grim Reaper and I are old friends. I know his ways all too well. He'll let you say goodbye to just about everyone, but you will never lay down a suicide. It is a badge he sews into your flesh. 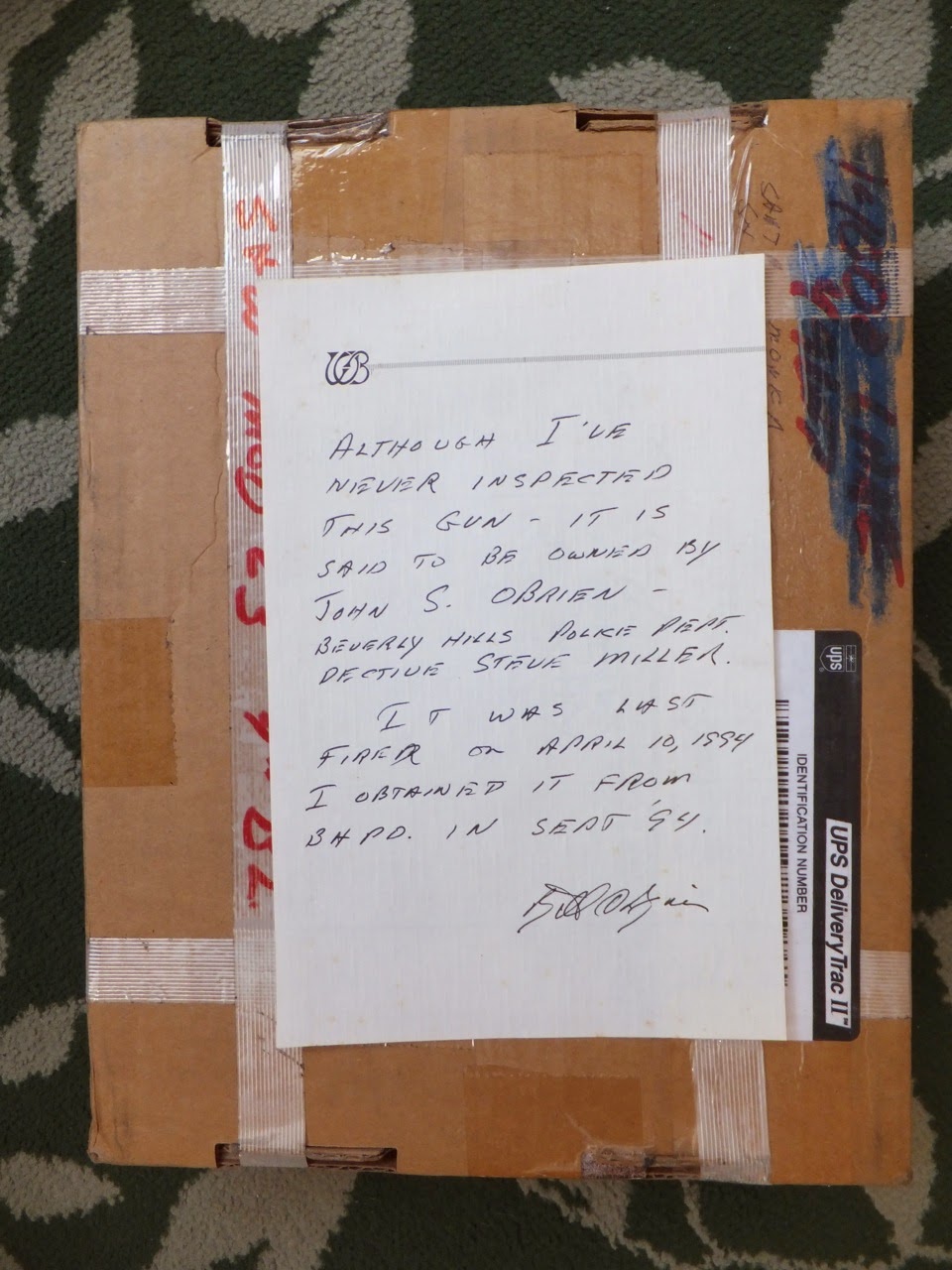 At some point after Dad's death, Mom gave that box to Eric. It remained sealed until nearly 19 years after John's death.

On January 4, 2013, some cosmic switched toggled. It was time. Someone had to verify the gun--acknowledge it--and it had to be me. I asked Eric to dig the box from wherever he'd stowed it. He did. When he handed it to me, it was at once too heavy and too light. I could not open it. I handed the box back to Eric as queasiness overwhelmed me from my stomach to my head. I was shaky and flushed.

As he worked through the wrapping, I thought, what will you do if it's covered in dried gore?

The masculine tailored look of the Smith and Wesson, a terrible handsome thing, was not lost on me. It was exactly the gun I would have expected John to select, which was oddly painful: to not be surprised by it.

The evidence tag was another story. I had not expected that: written verification on the inside of what Dad refused to acknowledge on the outside of this box. That rote slip of paper amid all this blood and emotion struck me at my core. 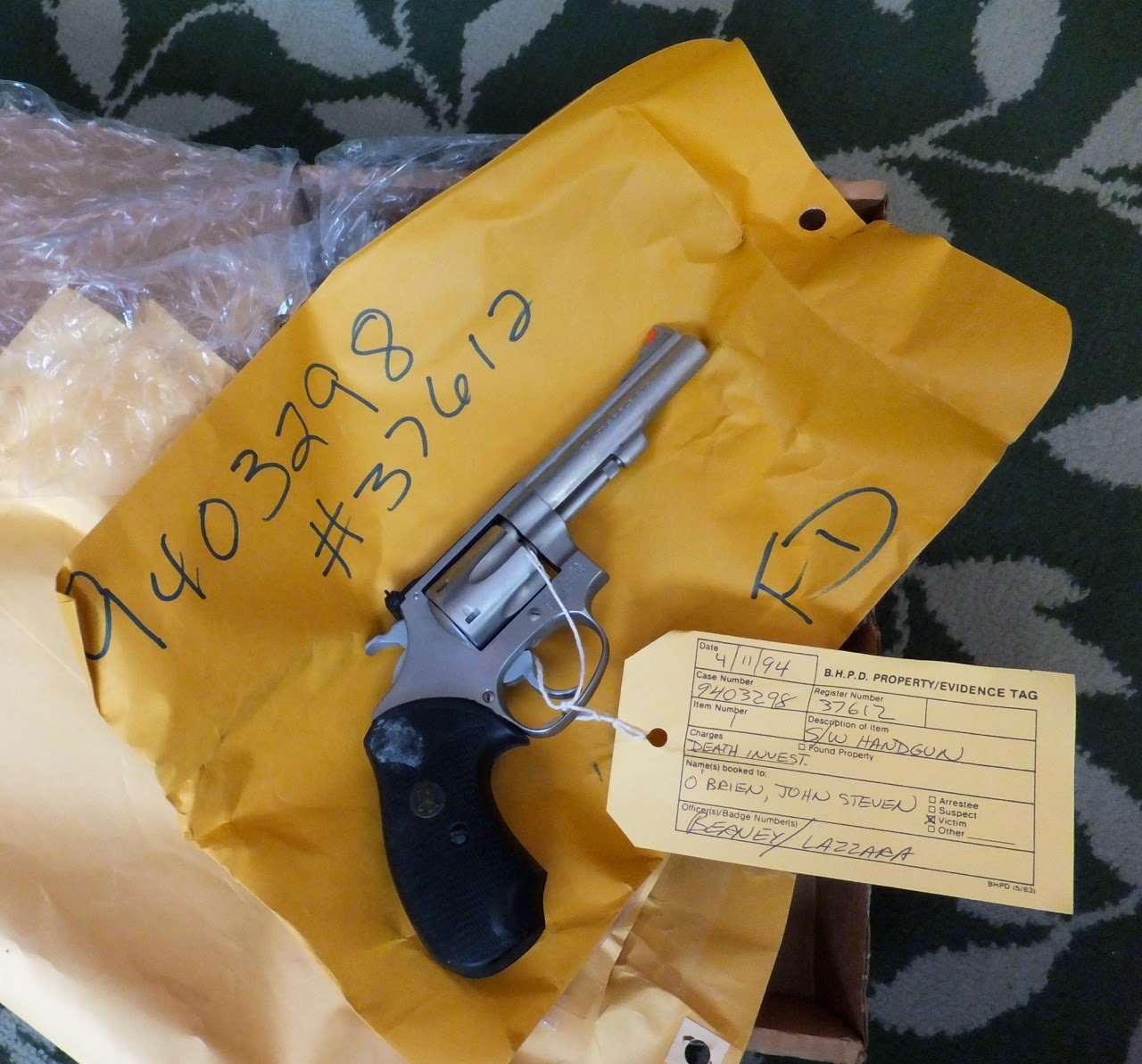 I could not touch the gun, but documentation seemed important. I don't know why. I took the photos and Eric took it all away.

Perhaps the heaviest burden associated with John's death is the dichotomy of the act: was it the zenith of cowardice or bravery? After 20 years and countless hours studying his body of work, I've concluded that it was both. Whether I'm right or wrong isn't the point. I deserve the modest liberation it affords.

This sounds corny and trite probably but I mean it with all of my being: I wish you peace.

We've never met in person, but I find your writing to be exactly what I need, when I need it most. For that, I thank you.

"It is a badge he will see into your flesh" _ how true. I share your pain.

Touching, brave and real. My heart goes out to you Erin.

I wish I could comfort you somehow. Your writing is so strong. Every time you revisit this topic, I am moved to tears. This post was even more heart wrenching than the rest.

But you do have a gift, the gift of writing. You have the gift to feel things so deeply and then be able to turn that into words that become images and emotions that other people can experience and feel. Like alchemy. Turning lead into gold.

I know, that doesn't solve this. But I hope it helps a little.

I'm so sorry, Erin. I might never have known about John if not for your writing, and now his life is very vivid to me. His death, and the impact of it, is as well. That changes how I think about other people and the world. Thank you. But I never would have wished you and yours to pay the price for that.

I don't know. I think suicide places us in an absurd situation; compelled to search for an understanding that cannot be known. Perhaps the only way to exit is by constructing our own meaning.

I hope you find peace of mind.

Thanks for reading and commenting. Thanks for the kind thoughts.

Thinking of you Erin. I will never forget John.

Earlier today, I read this line from THE GREAT GATSBY. "...we're 'boats against the current, borne back ceaselessly into our past.'. A literary line for a literary person.

Because I've had a life and because of the work I've done for so long I have felt the breeze and heard the rustle of Grim's garments as he made his rounds in the realm of suicide. I refuse to participate in the values debate of courage and cowardice, but of course that is my psycholical defense. After he had been diagnosed with an incurable illness Warren Zevon was being interviewed and was asked if he thought his long history of substance abuse of all kinds was a contibuting factor and he replied "That was my life, those were my choices." That phrase gives me some sort of solace these days when I contemplate the lives and deaths of folks like Robin and John. I honor their lives and their choices whether I understand them or not. Along with all the others I wish you and all those that knew and loved John Peace.

By grace and I'm sure a lot of hell, you are here and capable of this now. Maybe grace and hell go together.

I strive for grace, but it is not, as its etymology tells us, to be earned or gained by anything we do or don't do. Gratis. Free. Striving misses the point.

Grazi, Erin, for the post. I learn so much from your writing.

I admit I forget sometimes what you live(d) through because of your cheerful ways. I know you choose to be that. Your choice to be happy and not to wallow is a powerful one. It gives me great hope. You are a shining beacon.

Thank you for your grace and writing...with love, Katherine

That's a great choice for a Clevelander. Cleveland homeboy Eric Carmen (The Raspberries)wrote a song entitled "Boats Against the Current." Pretty sure it was on his first solo record a couple of years after Raspberries broke up. Maybe '77-'78. Pretty good number, If you have a moment to hunt it down and give it a listen I believe you'll enjoy it.

Thanks for sharing this Erin. btw, I miss you :)

Be not careless in deeds, nor confused in words, nor rambling in thought

Erin - nothing I can say will take the pain away.

Know this - your writing about your brother and other topics is always powerful. I like to think that is how John would like it.

You are my friend, and will always be.