I traveled to Oxford, Mississippi to attend a tribute concert for late author Larry Brown, with whom I had a correspondence that lasted several years. It was a 750-mile trip (one way). Here are some road pictures ala Erin. Click on any to enlarge for better detail viewing. 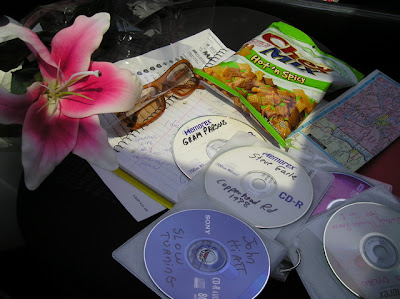 The stuff on my passenger seat. When I got in the car that morning, my Dearly Beloved had placed the Asiatic lily there, as well as an expensive chocolate. The chocolate was gone by the time I reached the highway. The lily lasted and lasted. When I finally pulled over for the night, I went to put it in water. Only then did I discover it was fake. 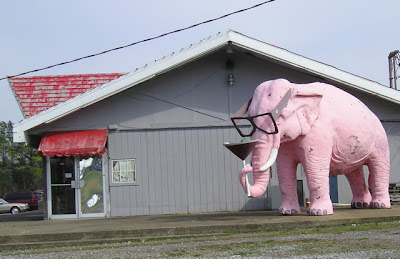 I was seeing pink elephants in Kentucky despite the fact that the bar was closed. 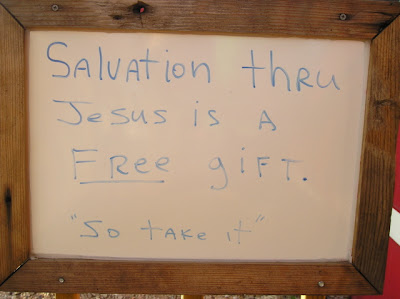 Praise the lord! This sign greeted me as I stepped into a house trailer-turned BBQ restaurant near Loretta Lynn's hometown of Butcher Holler, Kentucky. 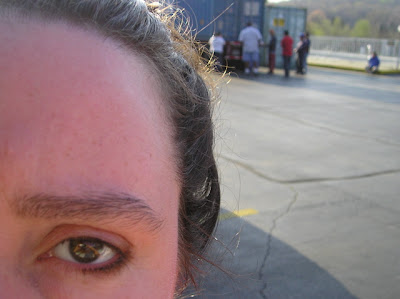 Even though this is a picture of my giant forehead, this is not a picture of my giant forehead. I was trying to take a discreet photo of the guys behind me, who had about 5 extension cords across the parking lot of the motel. They plugged in a power tool and sawed open the lock on that trailer. It was full of cartons. Then they went to work on the cargo trailer next to it. 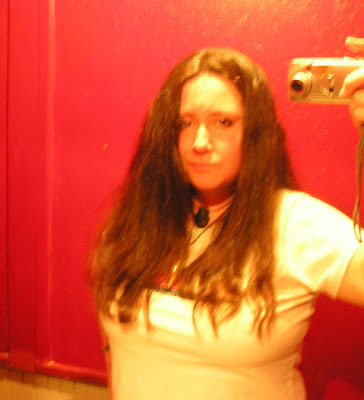 Me, sorta tipsy in some bathroom in Oxford. Too much hair and boobs! 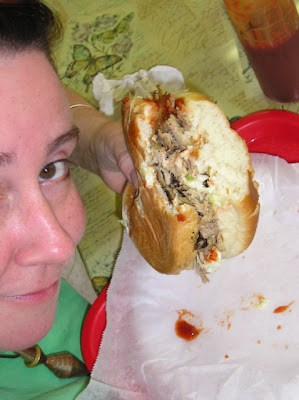 A massive pulled pork sandwich. I ate it in about 3 bites. Don't remember chewing. It was good. I was hungry. Yum! 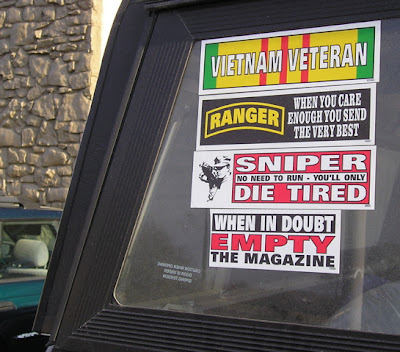 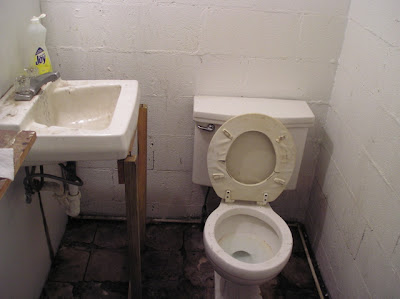 Yes, I used it. Click to enlarge to understand the bravery associated with that act. 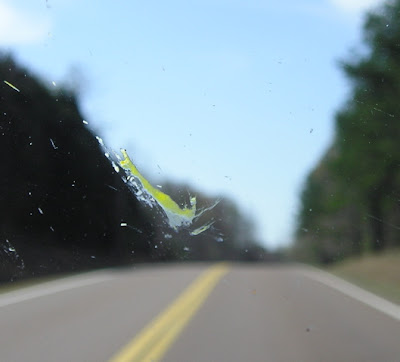 The grossest windshield bug booger I ever saw. Drove for what seemed like forever until I found a service station with a squeegee and washer fluid. 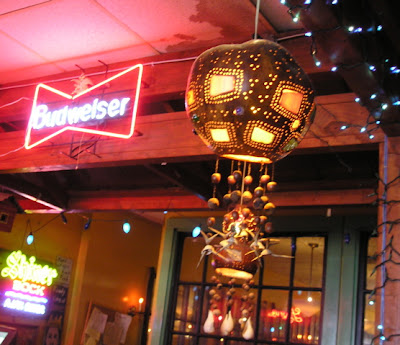 All the bars in Oxford have that Xmas light mojo going on. Loved that. 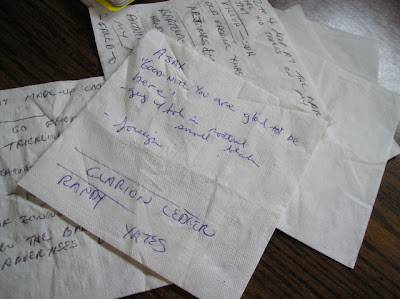 Despite the fact that I am a professional writer, I always forget note pads. I kept having to write my thoughts on cocktail napkins during the trip. The pen the bartender at City Grocery Bar handed me was an ad pen for "overactive bladder" drug Detrol LA. 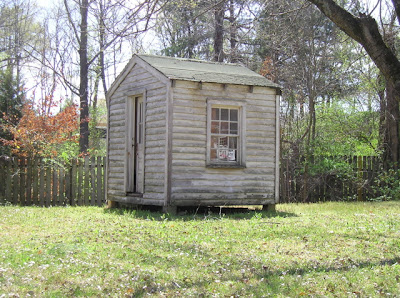 My hotel room in Oxford. 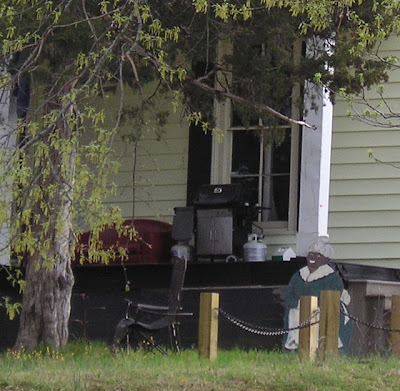 This lawn cut-out stunned the hell out of me. 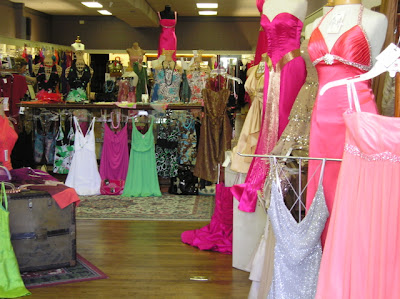 A dress shop in downtown Oxford. All the girls down there were pretty and dressy. I was a Yankee misfit. Oh well, tough shit. I am just Erin. 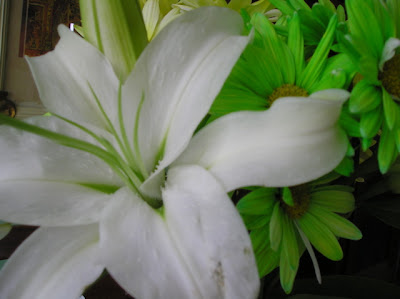 Too much hair and boobs!

What a strange shock it was when Larry Brown died.

He's a writer who I expected to go on for another 20 or so years. I could say "southern writer," but that's not fair to hang on Mr. Brown (or on Harry Crews, or on Lewis Nordan). My favorite book by Larry Brown was "Fay." Or maybe "On Fire."

I grew up way down south in a bubble of midwesternness on the west coast of Florida. The bubble didn't extend very far. Once outside it, I was in Brown/Crews/Nordan world, a place that was not without its delights (pulled pork, f'rinstance) and tragedy (yanked-off fingers, abbreviated limbs... freaked out ex-GI's...).

Looks like your pilgrimage managed to evoke a little of the south. Sometimes I miss it.

I love the picutres. I feel like I went on the trip without all the silly parts where I'm in the car counting mile markers.

Love the photos, I noticed the John Hiatt CD. I saw him at the Vogue theatre a few years ago, great show, It was a four minute walk from my house in Broadripple In. He went to Broadripple High School which is about a ten minute walk, as did David Letterman...Enough about me, great photo documentery, say hey to the goat and tell him boopsie said hey, he will know what I am talking about,its just an inside joke haha...Owe remind the goat he owes me close to 200 single dollar bills. Its all good... peace trails JW

The only thing there is too much of is a shirt covering those boobs.

Great pics, almost felt like I was there. Love the part about the lily. That's classic.

now that bathroom was really gross. You were very brave to use it. I guess I would have prefered to pee in the open, hahahaha.

Norm: Too much beer though.

John: Wow. Love that this post evoked a reminiscence in you. Particularly after reading Small Town Punk.

Maureen: I take pictures of things no one takes pictures of. Details. I love the details.

Josh: How many minutes to walk from my high school to your grocery store? Send Boopsie as a scout and tell her I'll give her a dollar when she gets back.

Pork: Baby, despite what you might thing, you can't handle the boobs.

Carla: You should have seen me trying to trim the wire stem. Too funny.

Mone: Good Lord, even the pic doesn't do it justice. My stomach turns just thinking about it.

Thanks for allowing us to go along!

Wonderful travelogue, Erin. Circular on the note of the lillies, too. Tell the Goat he's alright. Terrific.

FYI - I got zapped with a literati meme that I did the twist with...Harvey & Eck get another plug.

Yeah, I'm slow, but I'll put in a enough good words along the way to make up for it...

Josh: Good. I'll see you at a hundred o'clock.

Snay: No worries, there's more than enough Erin to go around.

Fool: Thanks. And you're right. He is a Top Goat.

Ahhhh... The open road. It calls to me constantly. I can't spend too much time looking at your pictures, or I will hop in my car and drive off in search of that pink elephant.

Anywhere I have to go in the U.S. I drive there, so I don't miss any of the good stuff in between. Except for Hawaii. I had to fly there. When are they supposed to finish that bridge?

Well welcome home. You can never have too much hair or too much boobs, Loved the hotel room. You'll have to send me the number.
I wasn't brave enough to even click to embiggen the bathroom pix. You are indeed a brave woman. No wonder you're my hero.

I'm not convinced the bug booger is on the outside of the windshied. It was a 750 mile drive. You had to entertain yourself somehow.

Can someone from Ohio be a Yankee? Ohio is only 750 miles from Mississippi. Actual Yankees would never live that close to Mississippi. You're not from the midwest either. That's the problem with Ohio. It's not anyplace but Ohio. Maybe that's not a problem.

I'd like a pulled pork sandwich. We don't have them in Vermont. In Vermont, when we say pork sandwich, we are not speaking of a meal. Depending on your interpretation of a meal.

Erin, what's up with penis boy?

S11: I love road trips. Funny thing, though, I start out thinking it's just a lil' ol' road trip, then after driving half way across the earth, I'm wondering, why the eff am I doing this again?

Libby: Be rest assured, no parts of Erin touched any parts of that toilet. Lots of hair and boobs, strong thigh muscles too.

Farouk: I am not going to dignify the booger comment with an answer. Anyways, I only pick the Goat's nose and he wasn't there.

Regarding Ohio, I am in Ohio, as is my forhead, upon which there is a pilgrim sitting as I type this.

Rick, I apologize for the Pork. Maybe he has something to do with Farouk's pork sandwich. Not sure. We tolerate him because he's so gosh-darn pretty to look at (as well as educational--who needs Wikipedia?) and, at the end of the day, he's just another guy looking for a little attention.

Erin its 10 past one hundred o'clock and no Erin? I'm up and leaving, case closed...Oh my God spring is here, I am shipping my shock for my bike to be serviced, I am buying a new motor for my sailboat,errr, yes a motor, its to hard to hold a beer, direct people how to drop or raise sail at the same time singing,calling on the radio for help for the people I have rescused and stuff like that. Oh! Also the neighbors sending me letters about my grass (never happened making it up, but not far from the truth) threating to have me sent to the Federal Pen for lawn abuse! My defense, no man is an island and what the hell does grass have to do with and island! Case closed.Thats about it. I go bed now my best to you and yourn JW

I lived in Clarksville TN along the Kentucky border in another lifetime (15 years ago). I have seen the pink elephant in a day when he was in better condition. His skin is slipping a bit. I don't remember a time when the bar was ever open. I used to wander around up there looking for the Amish Bakery on some backgrounds swilling RC cola and thinking about eating catfish.

Sorry about that Williams, old man, got lost on the quarter pound highway when my globulator malfunctioned. You know how it is. Careful with the lawn. The Grass Squad went through here the other day and my neighbors to the SouthNorth haven't been seen since.

Corn: I meant to get me some catfish, but the trip was packed too tight to fit it in. Hmph. Glad I'm not the only one done seen that pinky elephanty!

I had decided on Ole' Miss until a day on campus WITH students.

8:00 AM. Too much hair, lipstick, floral prints, shoes with bows, Southern vomit all over those girls. Yeah, that dress hop is practically 200 person lecture class attire.

I knew that they would eat this much-more-casual Midwest Girl up and puke me out during their AM bulimic binge!

The south... that shit is weird. Oxford is cute but...

Good music selection, but we expect that of someone going to a concert featuring REK.

Is that a Gram Parsons CD? Come to momma!

Too much hair and boobs!

Only if you're a guy. And then, you're only half right.

My kids have a knack for "needing" to go when the only thing around is the most vile truck-stop type bathroom. So far no lasting effects on any of us.

I was going to make a boob comment, but I'm too late, they've all been made. But just so you know? I'm thinking about it.

I love road trips, too, and your music selection is great. If you ever venture to Texas lemme know, and I may be passing through Ohio this summer with a vanfull of excited children heading to relatives in Penn.