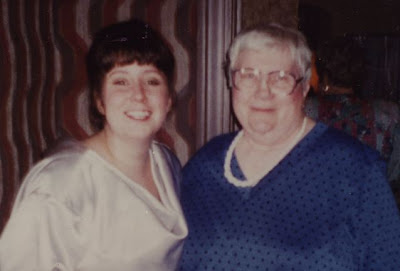 Gram never ate mushrooms. "I've always said that if you ate mouse, it would taste exactly like a mushroom."

On drinking: "After one or two, who's counting?"

Gram called the couch the "davenport."

Instead of humming or singing to herself, Gram used to lilt, "dooo do doodoodoo dooo doo doo doo" in an unrecognizable off-key way.

Gram made the best homemade mac and cheese you ever ate.

On getting her hair done: "I'm going down to Eva's to get my hair cranked up."

When making clothes for me: "Kid!" she'd say, shaking a straight pin at me. "I'm not going to make it so tight that you can't eat an olive!"

Gram used to make tapioca pudding from scratch. "I had to use up the milk," she'd say. She always sprinkled cinnamon on top.

Gram maintained that football players had the cutest little buns and that it was "a well-known fact" that body builders were not well-endowed.

Gram had an elaborate charm bracelet that fascinated me as a kid. There was a tiny working one-armed bandit slot machine, a itty-bitty leaning tower of Pisa, a little cuckoo clock ... the list goes on and on. She gave it to me before she died and now, ironically, my favorite charm is a plain tile that says, "Junior Golfers 1961."

If Gram's are a big part of your life, it's difficult to lose them...and the memories are so bitter sweet...

My Grandma should of been my mom.. my mother lacked what my grandmother was.

Nice remembrance. Was Soos her last name or short for something else?

You look like your grandma. That is intended as a compliment.

Gram Soos was the daughter of Stefan and Phillippina Seifert. I blogged about them a a few years ago (go for the pix, stay for the text, and definitely click the link in the italicized graph at the end).

Hoose, justification notwithstanding, you've got a lot of work to do on the charm offensive front.

Since I don't micro blog I have to comment on your twitter feed over here. Great pic of Da Kid brings back lots of memories. Stuffed all my dirty clothes in trash bags to take home and wash. Ate everything I could get my hands on and slept for days. Safe at home.

Yeah, I knew when I typed that comment it did not come out right. Since I am not a professional wordsmith, nor even a very good amateur one, I still can't find a complimentary way to tell a lady there is a family resemblance between her and her granny. Perhaps I should just say it is a great picture and leave it at that?

We understand your challenges, Hoose, and thereby give you a lot of leeway.