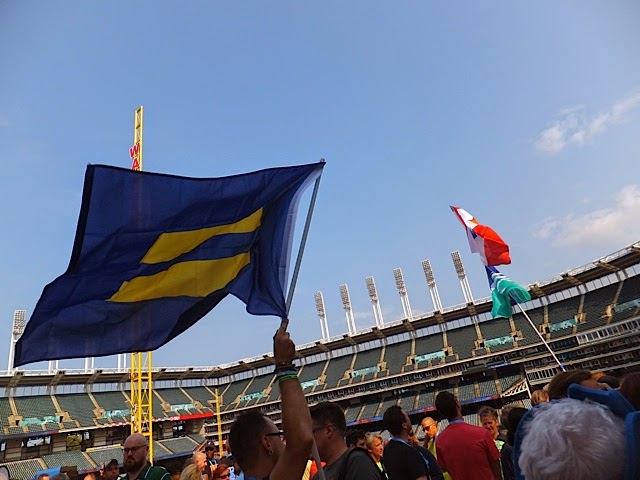 My experience with Indiana is minimal. When I was a kid, my parents, brother and I would drive through it every year on route to my grandparents' place in St. Louis for Thanksgiving.

Indiana was just a long flat stretch of earth that I had to endure between the equally endless Ohio and Illinois in order to get to the exotic city with the giant Arch on Wednesday and again on Sunday during the less festive trip home. But there seems to be a lot of bluster whirling around Indiana these days, so let's go there.

Truth: if you draw a line and designate one end as 100 percent gay and the other as 100 percent straight, we'd almost all fall somewhere between the two extremes. And the more you try to convince me you're at the 100 percent straight end, the more I think you're closer to the middle than you care to admit. After all, how many anti-gay preachers have proven this point? (And yes, I've had bi-curious moments in my life. They did not stick.)

So what the hell is going on in Indiana? The pithy memes and angry shouts don't reveal much. The Indianapolis Star, however, published a very thoughtful read on the subject by Stephanie Wang:

In Indiana, about a dozen cities, including Indianapolis, have local nondiscrimination laws that specifically protect gays and lesbians in employment, housing, education and public accommodation, which include business transactions. But in much of Indiana there is no such protection. The concern among opponents of the law is that it could embolden people to challenge those local laws, reports Wang, subsequently adding, During RFRA discussions in Indiana, state Republican leaders have dismissed statewide class protection for sexual orientation or gender identity. She goes on to note how the Christian Conservatives were the force behind this latest measure.

The underlying agenda seems clear to me. Frankly, I am so fed up with the religious right that I just don't know what. I cannot believe that in the year 2015 sexual puritanism continues to rule us. Yet, here we are.

I have no idea how the Indiana situation will play out (but according to the numbers, the good guys are winning the big game), but it will play out. It will likely dash any presidential aspirations for Mike Pence. Perhaps more significantly, now that Indiana has pushed this issue to center stage, will unconditional support for similar "religious rights" laws become a litmus test for the 2016 GOP primary? How far will the zealots push Jeb & Co. on this when the country is running so fast in the opposite direction?

The late, great Mike Royko wrote a column about an upcoming Indiana tourism promo: "Taste of the Indiana Toll Road."

No, I didn't make that up. Dr Seuss couldn't have made that up.

The problem with Indiana has nothing to do with homophobia. Give ma a break! The problem with Indiana is that 75% of the population is overweight. I totally made up that statistic. Who really cares about that legislation? Left wing race baiters and Right wing religious zealots. And, I was born in Indiana. Gentleman; start your engines.

You know, Bill, you may have been born in IN, but you live in SoCal, where homosexuality has essentially been assimilated. It's not like that everywhere else.

This is an ideological issue rapidly coming to a head, and the IN legislation (whether you view it as meaningless or not) and Pence have put a face on it.

Repubs just like you have allowed "right wing religious zealots" to steer the party here. Go on and keep acting like it's no big deal. The rest of us are getting sick of this bullshit.

As for my musings over whether or not this will become a litmus test, from Politico: Indiana law backs GOP hopefuls into a corner."

God did not create Man on a normal statistical distribution. If monkeys turned into people there'd be no monkeys. Amen.

BTW...Could you say a little more about those bi-curious moments?

Ha! I actually had included a detail about that in the initial draft, then cut it. And so it shall remain.

Anyone know what the impetus was for the Indiana RFRA? Was there a groundswell of complaints about religious freedoms being curtailed in the Hoosier state or did Indiana law makers just wake up one day and say, "Hey, we need a little more "religious freedom" around here?"

Erin, the supreme court has weighed in on this, kind of. Hobby Lobby. I'm guessing a same sex couple won't have a problem finding a wedding cake maker in Indiana. The GOP would be smart to come out for religious freedom with no apologies. They won't, but they should. I'm not a Republican. I am conservative. I do believe everyone should be treated equally, including taxed the same. I live in the San Francisco bay area. Not SoCal but I really like California. Not because of it's politicians.

Another thing. I don't think WalMart is being hypocritical about their preaching to Indiana. They definitely do not refuse service to anyone. You can just google "People of WalMart" and see what I mean. However, Apple is another story. Criticizing Indiana but having no problem doing business with countries that jail or kill gays for being gay.

Bill and I finally agree on something. Capitalism incentivizes hyprocracy.

As best as I can tell the new model for get rich quick in the U.S. is to create a shit storm over some social issue, crowd source a bunch of cash from the outrage, then move to Ibeza.

Re: Walmart and other giant businesses. I would think they fear an employee crossing his arms over his chest and saying, I ain't sellin' no weddin' fixins to no homersexule peoples. It jess' ain't right.

I hear they're selling them in the back of the bus. So disgusting. Also, Bill, I'm still waiting on what the impetus for the law was.

I guess the impetus for the legislation was to protect small business or shop owners if they decide to opt out of being part of a gay wedding, from being sued. Or, at least have some protection based on their religious belief's. Or, another scenario, they don't want to cater a KKK wedding for the same reason. Please have RJ spell check my comments. Thank you.

Furthermore, look at what your argument is reduced to: comparing a KKK clansman to a gay couple.

However haplessly you came upon it, this is the heart of the article. Joining the KKK is a choice. Being gay is not.

Does the small business, owned by a Methodist couple, have an obligation to cater the KKK wedding? That's my point.

People are born with inherent characteristics. In America, we do not discriminate based on these (think skin color, gender, sexuality, etc.). No one was ever born wearing a pointed hood.

A business has always had the right to refuse service based on obnoxious behavior.

@ RJ-while we're at it, it's "Ibiza." I only remember that because Ibiza was the refuge (temporary)of writer Clifford Irving during Irving's Howard Hughes bio hoax.

Just how prevalent are LGBT-KKK weddings?

The 'people of Wal-Mart' photos and videos do not, apparently, reflect choices by nor preferences of the Wal-Mart corporation. Allegedly. So gibbous housewives in tormented spandex are an added value to the Wal-Mart experience, and not its raison d'etre.

Hmmm. I wonder if a devout heterosexual Muslim could join the San Francisco Gay Men's Chorus? Assuming he had a really good tenor voice. I think you are born Muslim if you have Muslim parents.

You can be born Muslim but not devout right?

"Gay couples should be allowed to guard their marijuana crops with guns."

Yes. A test of one's devoutedness would be appropriate. Also, I'm wondering about a bisexual couple. Would a Christian bake a wedding cake for a man and a woman, both bisexual. Is a baker legally allowed to ask these things?

Stop the presses. I take back my earlier comment on Wal-Mart. The one about them not being hypocritical. As it turns out they won't sell Ronda Rousey's new book. Why? She's too violent. She's so good at kicking ass, I'm pretty sure she was born that way.

I think that freedom means freedom for everyone. As many of you know, one of my daughters is gay, and it is something we have lived with for a long time in our family. I think people ought to be free to enter into any kind of union they wish. Any kind of arrangement they wish.