This excerpt from The Irish Hungarian Guide to the Domestic Arts (which, incidentally, is brilliant and makes [ahem] a perfect gift) is dedicated to Al the Retired Army Guy, who sometimes needs to remember things old school.


The slumgullion experience of my youth always started off with a pound of raw hamburger on the kitchen counter. My father would pluck a chunk from it as my mother admonished him.

"But that's for the slumgullion!" she'd say.

Undeterred, Dad would sprinkle the meat with salt and pop it into his mouth en route to his downstairs machine shop.

Then Mom would slumgullify the wormy red mass by browning it, draining off the fat and adding terrifying ingredients. In went Monday's spaghetti, the oily onion and green pepper dregs from Tuesday's pepper steak, and the remainder of Wednesday's succotash (which included both lima beans and--god help us--hominy). Throughout the process, my brother and I exchanged looks of unified dread that culminated in silent mastication at the dinner table.

The name alone is hard to swallow. It's like a slug in a guillotine in a slum. It's an awful word the way crotch is an awful word. Who says, "Oh baby, I want to dive into your crotch"? No one says that. It's gross. "So baby, howzaboutsome slumgullion?" isn't much better.

Completely unreliable online historians trace slumgullion back to a) the watery refuse resulting from whale blubber processing, b) a dish made from slaughterhouse cast-offs in the slums of England in the late 1800s, or c) a thin stew California miners made from leftovers during the Gold Rush. Who cares which checkered past is accurate? Any one of them beats that candy-ass three-fingered Hamburger Helper glove.

Every slumgullion recipe is different. People add cheese, tomato sauce, bacon, frozen peas, macaroni--name your poison. I've heard of people using (help) canned corned beef. Others use condensed soup to tie it all together. (Admittedly, I practically deify a can of Campbell's cream of mushroom. If you can't turn one of those into dinner in 20 minutes, you're no housewife in my book. But if you transform a can of Campbell's cream of whatever into a platter of Company Chicken Supreme in a wink, you're in).

So what would Eringullion look like? Surely I could do better than that Betty Crocker broad and her boxed Cheeseburger Macaroni. Recreating mom's recipe was no fun. I needed to update and modernize the slumgullion concept while keeping it firmly entrenched in its ground-beef-and-ingredients-on-hand birthright. Even if I didn't have any leftovers, the slumgullion should feel leftovery: refrigerator round-up in a pan. 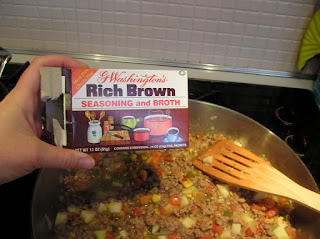 I chose onion, green pepper, a can of creamed corn, one of RoTel's original tomato concoctions, three old potatoes, (each with a host of gnarly eyes), some Worchester sauce, and a mysterious seasoning called "Rich Brown" that costs 50 cents for a box of eight packets at the discount grocery. This darling concoction of MSG, maltodextrin, onion powder, caramel color, spices, disodium guanylate and disodium inosinate was, according to the package, "a delicious broth and a seasoning that brings out the best in food flavors." I am all over that, I thought.

Unlike the Hamburger Helper experience, as soon as I started making the slumgullion, familiarity washed over me. You're home, assured a soft voice inside my head as I doused the diced onion with Mazola. Why, this was innate. Even the creamed corn that I had included as a mandatory "yuck" ingredient formed a beautiful golden pool when I poured it atop the beef. The slumgullion terrors of my childhood were all but gone, a harmless wisp. By the time I added the canned tomatoes and chiles, I was grinning from ear to ear and singing "Slum-gull-yon. Slum-slum-slum-gull-yon" to the tune of "Girl from Ipanema." I sprinkled a packet of Rich Brown over it all and sighed contentedly. 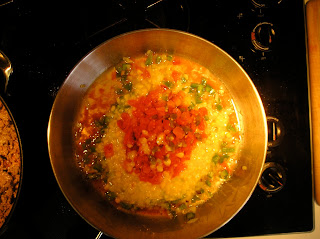 If I thought the Hamburger Helper instilled fear in my kid, the slumgullion was sheer terror on a plate. She stared at it wordlessly.

I transformed into my mother. "Eat your slumgullion," I said. She wrinkled her nose and took a bite, swallowing over a gag. 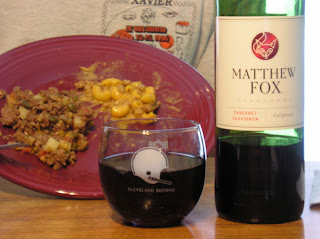 "Not bad," said my dearly beloved before taking a sip of Matthew Fox cabernet ($3.29/bottle at the discount grocery). "It's nothing special, but it's not bad."

I let his shocking assessment settle for a moment while blinking at him in disbelief.

"Nothing special?" I said indignantly as I rose to get another helping. "What do you mean 'nothing special'?" I turned from the stove to see my daughter quickly set down her plate, from which she'd dumped three-quarters of her slumgullion onto my husband's dish. "It beats the hell of that miserable Hamburger Helper!" I said.

"Well?" I said, "doesn't it?" My eyes shifted between my husband and daughter. "Beat the Hamburger Helper?"

My kid cowered before my arched eyebrows. "Um ... " she peeped. I glared in disapproval then turned to my splendid king with pursed lips.

"The leftover Hamburger Helper was better the next day," he said in a conciliatory tone. "Maybe the slumgullion will be better tomorrow."

I let "better tomorrow" float in the air for a handful of beats as my chest pumped short angry breaths and I glowered at him.

"Well. You. Miserable. Goat." I finally said, pronouncing each word in a low deliberate voice. Then I stood.

"Nevermind," I said in a high thin voice, then sniffed and retrieved my shoes from the steps.

"What are you doing?" he said.

"Forget it." I tied my shoes with force and stood, set my jaw and squared my shoulders. As my family asked after me, I stepped out the front door and began walking the earth, never more alone.

I have always had a guilty envy of guys who have women who cook for them. It always sounded convenient.

I craved slumgullion as a boy. I know mom used what leftovers were there and bouillon cubes were used to add flavor when there wasn't much left. A good comfortable memory.

People in the south make it and its called Scrapple...

The cookhouse on a carnival lot makes the same thing, calling it 'ghoulash.'

"Oh baby, I want to dive into your crotch"

Well...somebody had to say it.

Hmmm...I thought "scrapple" was that wonderful cornmeal-mush and offal conglomeration that is called "paunhaus" (spelling not guaranteed) in German communities. Slumgullion is goulash in my environ, too, and it is comfort food to beat the band.

This concoction reminds me of "Mohican Stew". Every chance we got as yoots, we headed either down to Mohican State Park or the Alleghenies. During one trip to Mohican, it rained Biblical. We eventually abandoned tents and huddled into a 1964 Chevy Suburban, including two really wet dogs. Being seasoned campers, we had stashed firewood in the trunks of several other cars. Next morning, everything, including a canned whole chicken of questionable hue and origin, went into a large pot. We had restarted the previous evening's bonfire in the smoldering muddy slurry, and soon enough, something close to edible was ladled out to accompany breakfast beers. Not bad, not good, it disappeared. It was only as someone raked the coals that we found the prize. A couple dozen potatoes, sliced and filled with real butter, the kind with the Indian maiden who's
knees were really her boobs
, then wrapped securely in foil had been roasting all night. The outer layers were scorched/soggy, but inside were the best potatoes I had ever eaten.

That's the saddest story ever.

To me, slumgullion sounds like an X-mas miracle. I love leftovers!

Yeah, this is how we roll.

@philbilly & Erin...I've had a lot of fun over the years with the Land-o-Lakes maiden...but just try to comprehend the genius who thought to cut that trick out of that image...THE FIRST TIME!? I really really wanna know. What brilliance! What imagination!

I think it was totally intentional, not a coincidence. Which would make the graphic artist that snuck it through proofing a bonafide American Folk Hero. Would love to know the real deal.

Sadly, on behalf of my arteries, I stick to Olivio Light now. Just ain't the same.

Erin-
Every time you bring up 'slumgullion' I am reminded of the Genesis LP "The Lamb Lies Down On Broadway". There are creatures in the story called 'slubberdegullions'. I believe I'll look that one up...
MR