Upon a bed of roses 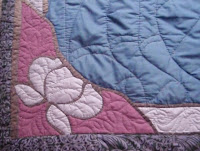 Up until just a few days ago, your humble hostess had never laid herself down to sleep upon a new mattress. Ever.

Each of the beds I have occupied were either handed over, under or down. In my mid-teens, I graduated from a single bed of unknown origin to a full that had previously serviced the guest room. As for the history of that bed, I have no idea; but a move to the guest room is surely a demotion in the life of any mattress.

In those days, my parents hosted frequent and notorious parties and the guest room bed was often piled with coats and wayward guests with dubious intentions (they were probably lined up outside the door--this was the 70's for chrissake). Hence by the time I inherited the mattress, it was duly humped into submission, but I soldiered on undaunted and eventually moved out, weary bed set in tow. As for its employ during my single years: thank god mattresses don't talk. That bed endured through all of that and the first few tender years of holy matrimony with the Goat.

Then one day while blinking at the ceiling next to my dearly beloved, the extent of the sunken depression that cradled our bodies moved me to action.

"Honey," I said, "let's change out our bed with the guest room bed."

Our "guest room bed" had been the Goat's bed during his bachelor days. One would normally associate its (ahem) "economy" grade with a roadside motel and the last occupant's lingering cloud of Aqua Velva. So it went with another atrocious mattress for four or five years until the Goat's parents purchased a new bed set and did we want their old one, which was a top-of-the-line-Sealy-when-we-bought-it or should they just throw it out even though it's practically like new?

Um, okay. Sure. Thanks. And the Goat and I did deliver unto that bed twelve more years of experience.


Now for a sidebar: Save for one uniquely stunning bed ensemble that was inspired by Toulouse-Lautrec's muse Jane Avril, and that my mother designed and hand stitched, all of the bed linens associated with this sad, sad tale were (of course) mismatched, handed-down, purchased on sale, or from the "seconds" bin.

Cut to a few weeks ago. Once again, I lay blinking at the ceiling next to my splendid king. Wrapped in threadbare sheets and pilled blankets, our bodies were barely suspended by the beleaguered and creaky springs beneath us.

"Honey," I said at the advance age of 46 and with nearly 20 years of marriage behind me, "we're buying a new bed." He didn't argue.

I shall not include the litany of traumas one encounters while shopping for the components of a complete bed ensemble in this already exhaustive account. I did, however, wholly adore the two mattress delivery men who were so beautifully matched to their chosen careers, it nearly brought tears to my eyes and earned them each a ten-spot for their superlative service.

Enter karma, six degrees of separation gone bad, kismet, irony, poetic justice, or whatever you want to call it; sometimes just desserts come in blossoms of two: one white, one black. For I surely deserved that lovely new bed and all the trimmings, but did I deserve what comes next? Let the reader decide.

The lush bed that moved the Goat and me as we lay upon it in the showroom in our jeans and coats,with my head resting on his torso and the saleswoman giggling at my quips, comes by way of my sworn enemy. Must I type his name? No matter, I shan't.

Behold the acrimonious details of our relationship at your own risk.

Sleeping with the enemy indeed.

Fer goodness sake rip that tag off the new mattress. Risk imprisonment, minor tears in the stitching, whatever hazards befall. None can be so bad as the nightmares you will face with the Donald associations.

That bastard will sneak into your dreams and make you want gold faucets and bad haircuts.

trust me on this. I would never lead you astray.

Make no mistake, the tag came off right after I took the pic, but it matters not. Take another look--the SOB has his name printed all over the mattress itself!

I suggest that with your able assistance the Goat administer the appropriate ablutions, thus now and forever insulating both your exertions and repose from the specter of He Who Shall Not Be Named.

Just think what you will be doing on that mattress and associate it with him...TeeHee...YES!! That will put him in his place!!

smudge it with sage! have it exorcised! splash it with holy water!

I've no doubt, that at one time or another, you've employed the Martha Stewart label in your day to day existence with at least a modicum of success. So, go forth, enjoy your new bed, and forget about the Donald.

WV- sprodogi
not even goin' there.

Congratulations on the bed.

It's a big deal, having a quality sleep on a brand new (yet oddly endorsed) mattress. I previously hadn't given much more thought to beds until I hit about 25 years of age. Somewhere in my early 20's, I bought a brand new mattress. From IKEA.

It was the most uncomfortable bed I had ever slept on, but I used it for a good few years there, up until I opted to sleep on a lumpy 15 year old sofa instead (with a hide-a-bed sofa, mind you, but I wouldn't bother to pull out the bed portion when sleeping).

When I moved out of that place, I left that sucker in my apartment with a note to the landlord that read, "Feel free to rent out the apartment as furnished."

Now, I only sleep on quality furnishings.

Good thing you had a couple of delivery men. Nothing harder than trying to move a mattress from one room into another. Although I've never tried it, I bet moving a grand piano is easier.

By the way, it's perfectly legal to tear a tag off a mattress (or a couch, easy chair, or pillow) once you've bought it. You just can't re-sell it afterwards.

I spend more on bedding than I do on clothes. It is seriously worth it.

The bed is wonderful, with the perfect plushness/firmness ratio. All the linens are upscale and rich. And big? No more Goat knees inching me off the bed anymore.

Why the hell did we wait so long?