Back in the seventies, Cleveland was home to a public art campaign that included über-cool murals at various downtown locales. There was a giant electrical socket, a collection of modsters seated on a park bench and the baddest one of all, Batman and Robin.

As a kid, those larger-than-life creations filled me with awe.

Although the murals are long gone, another dynamic duo, Robert Carillio and Joan Smith of Cleveland Storefront Art, is bringing back the same sort of magic to my fair city. I wrote about this hip new downtown phenomenon for this week's issue of fresh water. 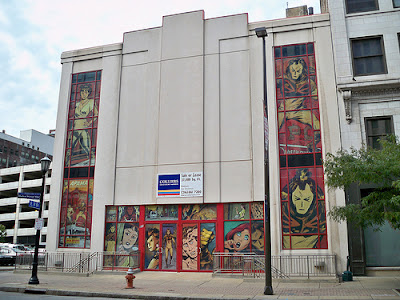 Meeting Joan and Robert was an elixir for my soul. In a world of bellyaching, complaining snivelers, these two shine above it all, making stone soup out of nothing and going one step further by turning it into Cleveland chowder.

The above photo depicts one of Cleveland Storefront Art's most ambitious installations. It features Apama, also known as "The Undiscovered Animal." The Cleveland comic book hero is the brain child of Ted Sikora. To my delight when I chatted with Ted for the story, he brought up those great old Cleveland murals.

"When I was a kid growing up, I'd see that big mural of Batman and Robin," Ted told me, "and my face lit up every time. When they took it away, it was a bummer."

Ted is exactly right. The demise of the murals was a bummer for the whole city.

But thanks to Apama, Ted, building owner Joseph Ditchman and Cleveland Storefront Art, local kids have something to swoon about once again.

Apama is just one of the creations dressing up downtown windows these days. For a more complete peek, check out Cleveland Storefront Art's Flickr pages and don't miss the fresh water article.

BTW, Get your artist buddies to bring Abraham and Isaac back to Kent State.

"George Segal's 1978 cast-from-life bronze sculpture, In Memory of May 4, 1970, Kent State: Abraham and Isaac was commissioned for the Kent State campus by a private fund for public art, but was refused by the university administration who deemed its subject matter (the biblical Abraham poised to sacrifice his son Isaac) too controversial. The sculpture was accepted in 1979 by Princeton University, and currently resides there between the university chapel and library."

is this the mural of "modsters on a park bench" you mentioned? is it gone now too?

i worked downtown in the old huntington bank building for a few years. i loved it!

Is your city in the same position as Detroit. We've been viewing a series of TV programmes which are really frightening. People bulldozing middle-class housing rather than pay taxes on valueless housing.
I unsure of me geography on that corner of the states. Those cities seem to merge in my mind, sorry.

Thanks so much again for the coverage, Erin. And hey, issue 3 and 4 have some west point market action. Maybe we can work in a lecho.

RJ--I probably had read that in the past, but didn't pay proper attention. WOW. Your right, Kent should get him back some way.

GG: yep, that's the one! Thanks for finding the link.

Vince: we are having a very tough go of it throughout the midwest. Haven't heard of the bulldozing biz in Cleveland yet though.

If you are mid-west what the frick is Iowa and Kansas.

Iowa and Kansas are the "Great Plains" Vince. But you know well there's no use trying to decipher us yanks.

Correction: It may be more appropriate to refer to Iowa as "The Heartland." Kansas is definitely a "Plains" state. See what I mean.

Ohio is also known as The Erin O'Brien Territory.

I was so moved by the freed chalk board that I freed 2 of them that I've had in my garage for years.

The colors blew my mind when I saw it. I call it "Metamorphosis in a House of Stairs" because it reminds me of Escher.

Walking in downtown Cleveland was really an eye-opener... Thanks.

Thanks for dropping in, Nicolas, and for the cool link. The colors are simply stunning.

I also loved the Batman and Robin photo over at your place, so thanks for that as well.