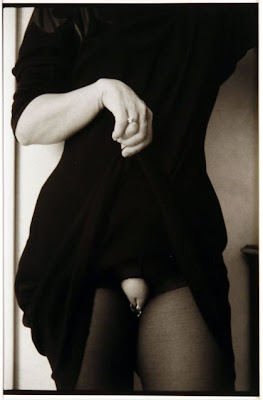 The show is stunning, but difficult as well. The images are evocative, beautiful, honest ... the battery of meaningless adjectives could go on and on but it cannot begin to aptly represent the show the way the above graphic does. Although I didn't consider any of the photographs to be pornographic, they are certainly graphic. And how strange it was for this no-holds-barred Girl Writer to feel a bit uncomfortable among so many sexual images.

It wasn't the images that shook my balance, but the other people at the opening. They were a completely normal sampling of folk, fully clothed, noshing on cheese and sipping Chardonnay. But I didn't know them. They were strangers. And standing in front of a suspension bondage image while I knew nothing about the person next to me was ... a little freaky.

Was that sixtyish man puzzling over the image of the spread-eagle woman hanging from a rack aroused? Offended? Shocked? Relieved? Repulsed? Irritated at the woman next to him (me) whose face kept tocking back and forth between the image and him as she tried to gauge his reaction? Maybe all of the above.

Hence, the ironic truth is that I was more interested in the viewers than the images at times. I guess that's completely appropriate. The viewers changed the show from a roomful of pictures to a living dynamic experience. It surprised, embarrassed and delighted me. I desperately wanted to ask people how the images made them feel, but how?

If you're local, I urge you to see the show. Here are some additional preview images. Most of the prints were $400 to $450. For the record, I asked Herb how much he thought a nude Erin O'Brien would go for. He didn't name a price. He just said, "Whatever we could get for it."

"I'm guessing at least $35," I countered, but Herb had already turned to charm another woman.
Posted by Erin O'Brien at 10:48 AM

I think a Herb Ascherman of a naked Erin O'Brien is a terrific idea.

I wish I lived closer. I'd love to see these photographs. It looks like he has used different techniques: in the radio show he talks about platinum prints, but some of these look like silver prints to me. It does say 1967-2007. I don't imagine he was doing platinum 30 years ago, so that is to be expected.

This whole subject, that of nudity, sexuality, and society, is fascinating to me. A good part of the dynamic of any photograph showing a naked person is the sexual one. I imagine that there would be more tension in a gallery in Cleveland than there would be for a similar show in Vancouver, but it is going to exist in any city in North America, where nudity pretty much equals sex. Photographs like Herb's challenge preconceptions about nudity: are we looking at a sex act? An act of power? An act of faith? The preview images seem to embrace all of these.

It's the dynamic that Robert Mapplethorpe and Jock Sturges explore.

NOTE: I'm not really Anonymous, it's me, Dean. Blogger won't let me post a comment with my google id. Hope I don't mess up the link.

I would love to see that exhibit. Sometimes I think I need to push my comfort level.

Wait ... so the woman being worshipped on the lower left there isn't you?

These are great. I'm not sure I'd want one on my wall, though. And who is the asshole who wrote this stuff to you at the Free Times? Man oh man.

I'd pay at least 35 bucks for a nude Erin, and I bet a bidding war between Dean and Doug would drive the price up into 3-figure territory.

Ascherman wanted to include me in his portfolio, but he couldn't find a camera angle wide enough to fit all of me in.

The Art Exhibit is a great venue for discerning between pretension and sincerity among patrons, n'est ce pas?

Honestly, if I'm going to expressly look at naked bodies it ain't going to involve wine and cheese.

Let alone a shared complex with the "sixtiesh" anybody. Yech.

Sounds VERY interesting! I would love to see the show myself.