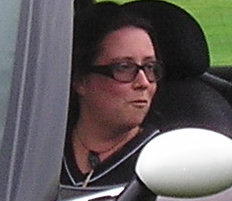 Dumb Erin flails on the screen. Men with huge erections are chasing Dumb Erin, who stops, teases them, then drinks heartily from a longneck bottle of beer.

Smart Erin sighs and rolls her eyes. She covers her hand with her face, peering at the screen from between her fingers.

Dumb Erin laughs maniacally. She runs, falls. He laughter turns to sobs. The men chasing her grow horns. Their flesh glows and turns red. Their hands and feet transform into claws. Dumb Erin screams and goes to drink from the bottle. But it is no longer a bottle. It's a gun!

The creatures chasing Dumb Erin no longer bear any resemblance to men. They are full blown devil monsters, fast and furious and mean.

Dumb Erin pants furiously. The devils have somehow fused into one enormous beast and he's gaining on her. She looks between them and the gun with confusion. Dumb Erin bites the fingernails of her shaking hand …

Smart Erin can't stand it anymore. She stands. "No! Don't!" she yells at the screen. "Don't throw the gun at the monster!" It's useless of course. Dumb Erin is already winding up her arm.

Dumb Erin throws the gun at the Godzilla-sized devil. It bounces uselessly against his chest. He rages on and descends on the tiny figure of Dumb Erin. Her screams are muted by his mass as he crushes, smashes and devours her.

"Every single time," says the disgusted Smart Erin to no one as "THE END" blazes from the otherwise black screen.

When will Dumb Erin ever learn? Smart Erin is just so sensible.

After visiting Carla's page, I suspect she would simply invite these "Man-Demons" to High Tea. That would be a "Smart Erin" decision. It is also another techique to assuage those nasty erections!

Could you please tell us more about the enormous breast? don't gloss over detail about the nipple. Thank you.

hey erin, only just saw your comment on my grubenpony blog, it´s not really in use so í don´t really check comments... love your blog. feel free to drop by on ejaystone.blogspot.com anytime. hugs!

It's Smart Erin's connection to all of her sides that allows her to cherish her Dumb Erin as just one facet among the many...and that's what makes her such a precious jewel. Nice bit of writing. Thanks for sharing.

** And folks, it is SO WORTH IT to just capitulate and send Erin the $20 for her book "Harvey & Eck" - not only do you get a terrific read, and an autograph...but there's a surprise too...just like Cracker Jacks. You won't be disappointed... **

...and no, Erin does not pay me to slip in these shameless plugs...it's just a "thank you" for introducing my son to The Drifters & Blue Moon via the Erin Corruption of Youth Program. Look out world...an a cappella revival has begun...

Dumb Erin is what makes Smart Erin so smart.

Stay e be happy and alive and, by the way, visit me good at PALAVROSSAVRVS REX!

Ah. 'Tis quite the universal internal struggle you describe, Madame.

Dumb Winters is like a parrot squawking on my shoulder all the time. Smart Winters is often nowhere to be seen.

Probably hiding in the library, the coward.

(did somebody say nipple)

I didn't think he was going to eat her...I was thinking something else...

That must have been some movie!

Well, yeah! But I have to admit Smart Erin is less fun on dates.

Not once did you say smart Josh. I take this as a slight, unless of course it was meant as a two thumbs up.It would be nice in this world that in every blog the post was posted and then a mention of myself in a positive light. Is this asking for to much? Kind Regards and keep up the good work all my personalitys keep coming back. JW

i feel like such an anus for not visiting.

allow me to pass along the cowbell love erin!

Hey Dumb Erin, give me a call sometime.