Lunch with the Crunch 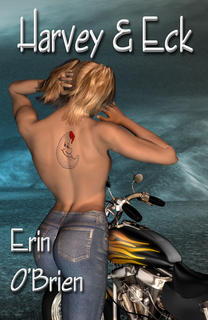 All you need to know about this excerpt from my first novel Harvey & Eck is that Harvey is 33 and preggers and she calls her old boyfriend Captain Crunch.

And now for a hot lunch date.

I waited until the eleventh hour to call him. It was nice to feel in control of something. I got his absolutely annoying voice mail. I left a message saying I’d be at the cafe around noon, then I left the phone off the hook for the rest of morning. If his plans didn’t coincide with mine, tough shit. I would wait for him until ten after then leave if he wasn’t there. And, assuming he did show up, I would behave like an adult, have lunch and some talk and then leave. Alone. Yeah, that was my plan all right. I would be Harvey the Confident. But to be honest, as I was getting ready I was nervous as a cat. What would it be like? Would I burst into tears when I saw him? Would I be the aloof-one-minute-sexy-the-next girl he always found so seductive? Would he try to seduce me? What if he didn’t? What if he took one look at me and rolled his eyes?

I tried on about every outfit I own and ended up wearing the very first one I had tried on and rejected—a black sweater that’s big enough to pass as a dress with a pair of black tights and my high-heeled boots (what I call my Hooker Boots, the ones the Crunch used to love, the ones he used to ask me to leave on while we did it). Anyhow, the outfit seemed to hide all evidence of pregnancy. I gave myself a final once-over in the mirror and decided I would let the afternoon unravel all on its own. I’ve never been good at putting on airs anyway.

He was there when I got there. He was just as I remembered. And when his head turned and our eyes met, it was just like the first time I saw him. Everything came right back at me like, zing!

He was all there. All of him, right there.

That smile (God how I loved his mouth and all the wonderful things he could do with it). Those blue eyes (God how I loved his eyes and the way they used to look at me and make me feel like the most gorgeous creature on earth). Those hands (God, dear sweet Jesus, his hands). His shirt was opened at the top and I could see some of the hair from his chest peeking out. (God, that fine, curly hair). Yeah, I remembered the Captain all right.

“You’re wearing the boots,” he said, one eyebrow arched.

I laughed, sat down. “I wasn’t sure you’d remember.”

“How could I forget?”

And he was leaning forward, elbows on the table. And he had that wiry little grin. And he was looking into my eyes and I was turning into, well, melted butter. And don’t think for a minute that I wasn’t laying it on just as thick. Sideways glances, chin on fist. Licked lips.

“Took the rest of the afternoon off.”

The restaurant hadn’t changed. The potato pancakes were delicious, and served under a mountain of steaming baked apples. It was all coming back to me. There was a reason I got involved with this guy. This was fun.

Sure you won’t have a little wine?” he asked.

And I had forgotten how sexy and charming the Captain could be, how powerful our chemistry was. It felt and good to be the center of attention, to have a man interested in me for me—Harvey, the woman—instead of being interested in me because I’m the world’s most unlikely Madonna. And it was a welcome change to talk to someone about something other than all that baby and pregnancy stuff.

“Tropic of Cancer is one of my all-time favorites.”

“You probably just liked the dirty parts,” I said.

He kept telling me how great I look, in a way that made me believe him. Could I really be almost five months pregnant? And he’s missed me. A lot. I was important to him. On and on he went, pushing all the right buttons. It was nearly 2:30 when the last sip of wine sluiced down my throat and I noticed we were alone in the restaurant. The bill was on the table. I felt like we’d just sat down, but it was time to go.

“I don’t know.” I shrugged my shoulders. “Childbirth?”

“Really?” he said. Then he reached in his pocket and pulled out the key. He set it on the table and pushed it towards me with a deliberate finger. Room number 119. “Can’t the rinse cycle wait?”

And that feeling started way down deep inside of me. That craving, that need. That unmistakable desire. The insistent want of sex, whole body sex. Instinct. It was that age-old female animal need for the male body. Hard and hairy and musky and-

“Meet me there?” The words came out of my mouth like so many birds from a newly opened cage.

The drive was endless. I was blinded. All I wanted to do was get into bed with that man. I wanted to wrap myself around him and be one hundred and ten percent woman. I wanted to gorge myself with sex, with his sex, take out my frustration on him. I wanted to consume him until there was nothing left. I was crazed. Nothing was going to stop me.

We parked next to each other right in front of the room. There was no other cars in the lot. A blustery cold wind was blowing snow all around. I huddled next to him and watched his hands as he fumbled with the key. It got stuck for a minute and I stamped my feet and pulled my coat around my neck as he jiggled the thing and kept saying, “shitshitshit.” When the door finally unlocked, we were in the room and on each other in a flash.

And then it was kissing and hands and clothes coming off. And more kisses and moans and hands on flesh. I guess you’d call it a frenzy. And he was everything I remembered. Everything.

And then something happened.

I caught my reflection in the mirror. Side view. And it just struck me. Something about the way I looked. I stopped. I put my hands on his chest.

His hands dropped to his side. I walked to the mirror. It was as though I was seeing myself—really seeing myself pregnant—for the first time. I put my hands on my round belly. I was alive, full of desire and creation and energy. He came up behind me and looked in the mirror. I studied his face. It was empty.

When he saw the look in my eyes and realized that there was no changing my mind, his eyebrows collapsed. “But,” he started to say something. I shook my head and crossed my arms over my chest. He let his hands drop to his sides and sighed a sigh that was flavored with little bit of anger and a lot of disappointment.

We said goodbye. My goodbye was aloof and apologetic, his was tight and full of frustration. I think it was the abruptness of the thing that got to him. He really thought we were going to fall back into it. Who could blame him? We were naked in a motel room. But when my button turned off, it turned all the way off and I know he felt it too. I couldn’t do it. I just couldn’t. The girl that was about to get between those flimsy motel sheets was the same girl who gets between the crisp white sheets at home. And the satisfaction I might have gotten there in room 119 wouldn’t have lasted as long as a snowflake on the tongue.

So I drove through the storm, feeling a little bewildered. I thought I would have felt disgusted with myself, or maybe victorious. Something. I didn’t. I just felt like me. And I’ve got one man who doesn’t want me sexually and another who wants me only sexually. I’m not sure I want either of them. I’m not sure of anything any more.

I went home and started the laundry.

Thanks for taking the time to read this. Harvey & Eck is available on Amazon or visit my website to learn more about the book.

To all my friends who have been picking up my link on Dooce, this is the last day I will be listed there so you might want to make a note of this URL. I urge you to stay tuned. Can you really risk missing out on upcoming installments such as "The Lone Plumber"?

After all, every human being needs an owner's manual.

I find it even more intriguing now that I know it is a dirty book (or at least has some racy parts). Drea would be shocked and appalled...which increases the appeal even further as does the motorcycle on the cover. That gives me hope that there are rough and tumble biker types (like me) in your book.

I would love to be able to write. I think it is much harder than most people realize and for that you have my highest respect.

My creative writing skills were substantially wiped out by law school. Law school really twists your logic and analytical skills.

How much of your day are you able to devote to creative writing? I never seem to find the time to do much of anything consistently. With work, physical therapy for my back, family obligations and, of course, my chronic self-stimulation over-indulgences, I am not certain that I could actually devote any significant amount of time to put anything down longer than one of these rambling posts.

Anyway, I find it amazing that you wrote, submitted and got published a complete work. Now that I know a little bit about your personality (including fantasies about men with their names on their shirts, diapers, shoes in clamps and mean-spirited remote control operations, reading your work will be an interesting endeavor.

By the way, what is Dooce?

I got the link from dooce, but bookmarked it the first day. I have come back everyday since. I will continue. You have the same sort of strange humor that I do and you are incredibly talented.

Is there any pooping in this book?

I too arrived via dooce and try to keep up daily. I immediately linked to you in hopes that a little of your smarts might wear off on me. That was excellent placement being on her site. Good luck to you, a fine writer.

Congrat-chu-freaking-lations!!! It looks like a most tasty read. Have you had a published author party yet??

It took me years and years to see publication. And even though my publisher is teeny-weeny, I'm proud of the end result.

Keep reading, friends. And if you like what you see, tell a friend to check me out ...

Thanks for all the kind comments. They mean the world to me.

confidential to flamingo: You do write. Look at your blog. I think you're funny as hell and your writing reflects it. That's a talent all in in itself. I write all the time. There is piles of laundry and dust around here and we're not rolling in dough, but who cares? I'm writing! This is what I'm supposed to be doing. Took me years to figure it out.

confidential to garrett: you'll have to find out for yourself.

Jesus, Erin, where I was mentally when I read this. My GOD. It all comes back to me-a flood of memories. I didn't read your book: I STUDIED it.